The road from San Salvador to Santa Ana is diverse. The capital’s streets quickly give way to a highway that is full of people walking to bus stops where brightly colored busses take them across the country. In the summer of 2015 a bus strike was forced with the murder of a number of bus drivers. Travelers had to pile in to private pick-up trucks or walk the whole way. The busses run again. Down the highway, through small towns that seem to almost sit on the road itself. Speed bumps suggest to drivers to slow down. Sometimes police check points force traffic in to a zig-zag that seemingly allows the police to see who’s driving past. Every so often there’s a man with a shotgun slung over his shoulder guarding a gas station or store front. These things stand out to an outsider. And it’s difficult not to look for the evidence of the issues, problems, gang violence one hears so often about.

6,600 murders in 2015 in a country of 6.4 million. Entire neighborhoods controlled by gangs. Ubiquitous extortion and sometimes inescapable involvement. Police corruption and constant, violent raids. An official Supreme Court designation of gang activity and association as ‘terrorism.’ Thousands of people forced to flee the country, to make any attempt to reach our country, to reach a supposed safety that our country offers — many of them sent back to the same places where they risk death. These headlines cycle through one’s head while making way from San Salvador to Santa Ana and into the mountains, headlines that influence the entirety of the trip. We’re here for coffee, but even though we fly past on the highway, the road itself is a reminder of everything else.

The highway eventually leads to a road that winds up the mountain where the buildings are replaced by trees, the edges of the road demonstrating a charming precariousness that reflects the whole country, especially at these elevations. After a while the pavement becomes dirt, in some places barely a road making it clear how remote these farms actually are. After the eruption of the Ilamatepec Volcano in 2005 some of the farmers we work with had to rebuild the roads themselves without government assistance.

Stopping just short of the clouds we reach Finca Miravalle. The views from this farm can hardly be portrayed in photographs. 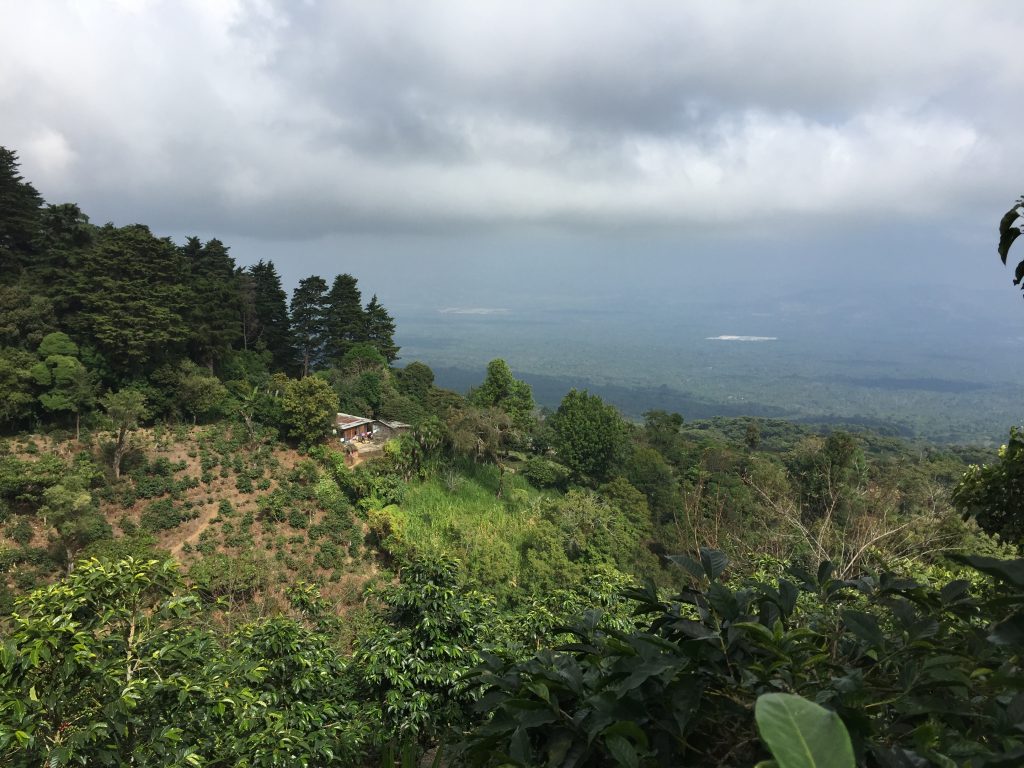 One can feel how the air is different here. It is the smallest of the farms we source. At 72 acres it is highly curated, with low cut trees of Castillo, Borbón, Orange Borbón, Dwarf Borbón, Pacamara and San Pacho. 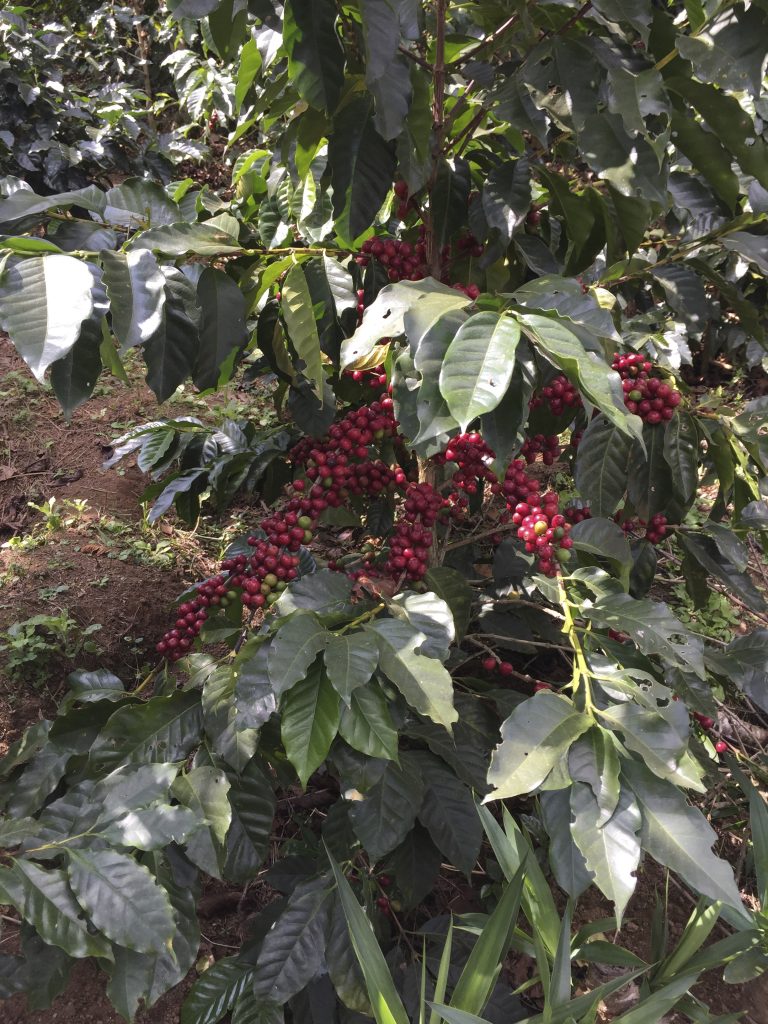 Finca San Carlos is next on our list, owned by Carlos Riera, brother of Jaimie. Our tour is limited to a couple of areas on the 119 acre farm. We learn that the use of Copper Hydroxide (an organic fungicide) is helping combat Roya through preventative means, though it doesn’t do much to cure already infected plants. We can see the remnants of the blue spray on the leaves, a more welcomed sight than the yellow dots of Roya. They are also fortifying the lots with Roya-resistant Castillo. A number of new Geisha trees have been planted during the past year as well. Other cultivars present include Borbón, Pacamara and Catimor. 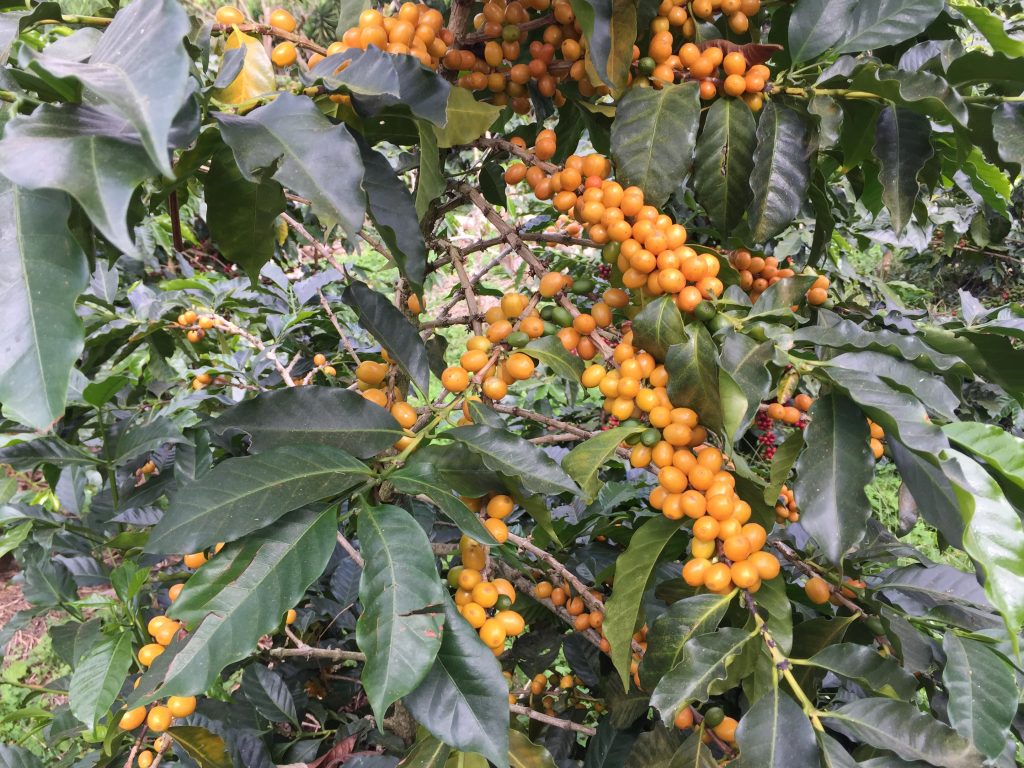 After leaving the mountain we take a tour of the Cuzcahapa Cooperative in Santa Ana, where we’re able to see the processes of patio drying, dry milling and packaging for export. As a company, we have been coming to this cooperative for a number of years and have watched as it has improved year after year. Although they continue this improvement, there is concern regarding the market’s slump. 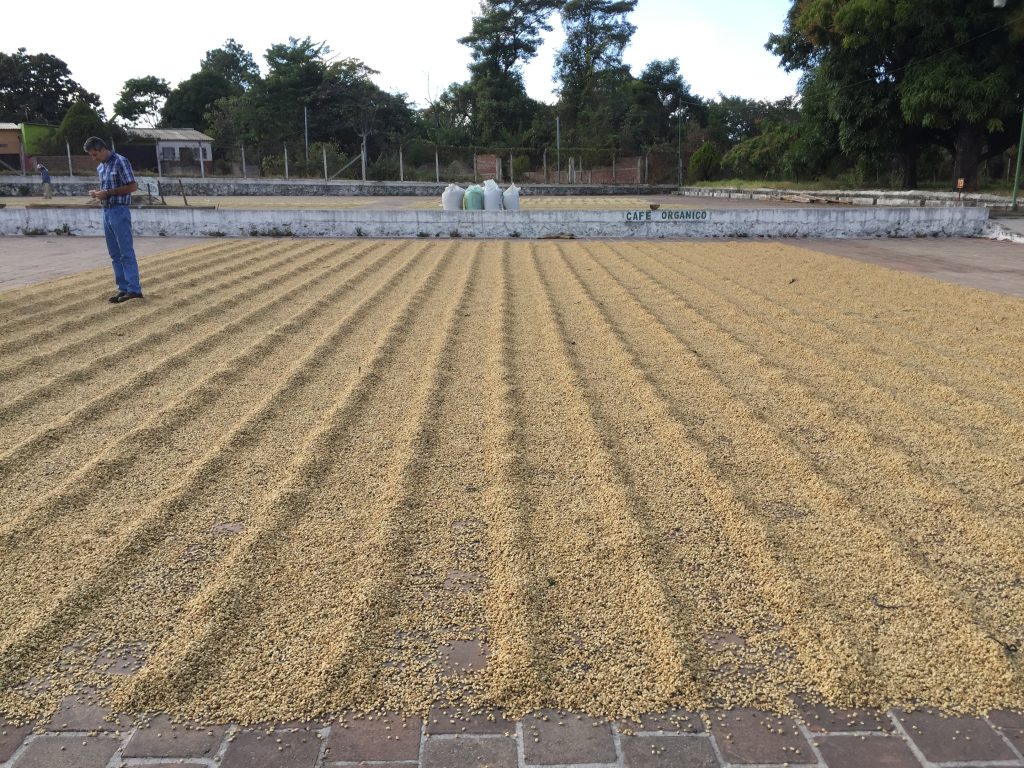 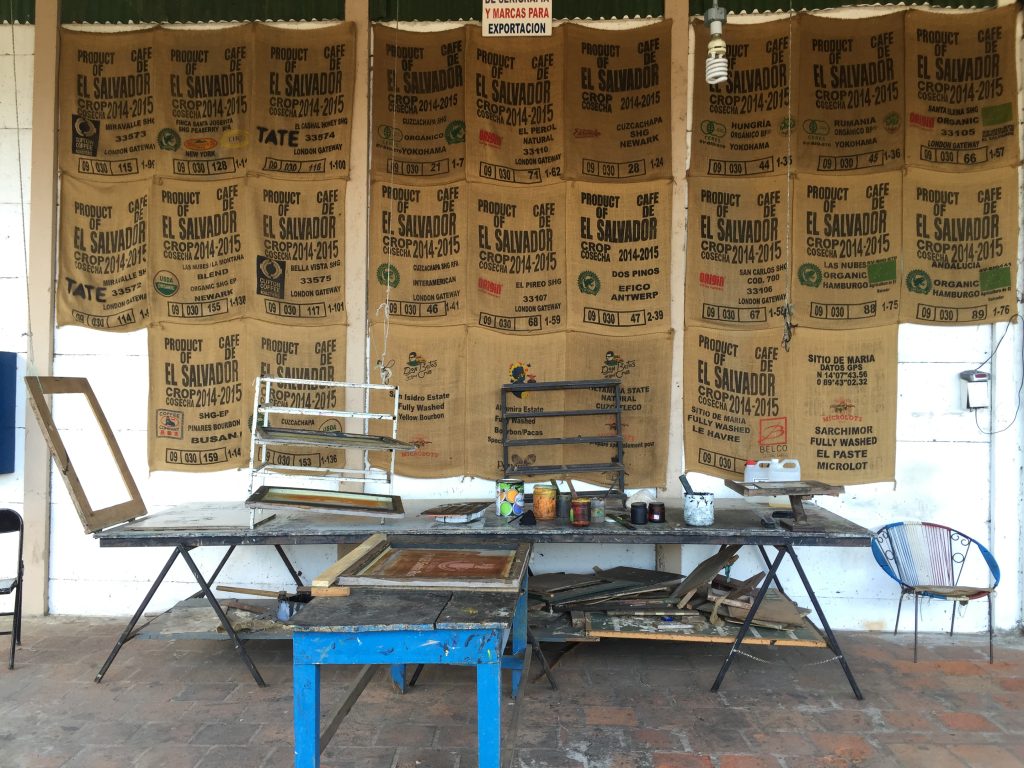 Bags for export are screen-printed by hand with custom logos for customers. 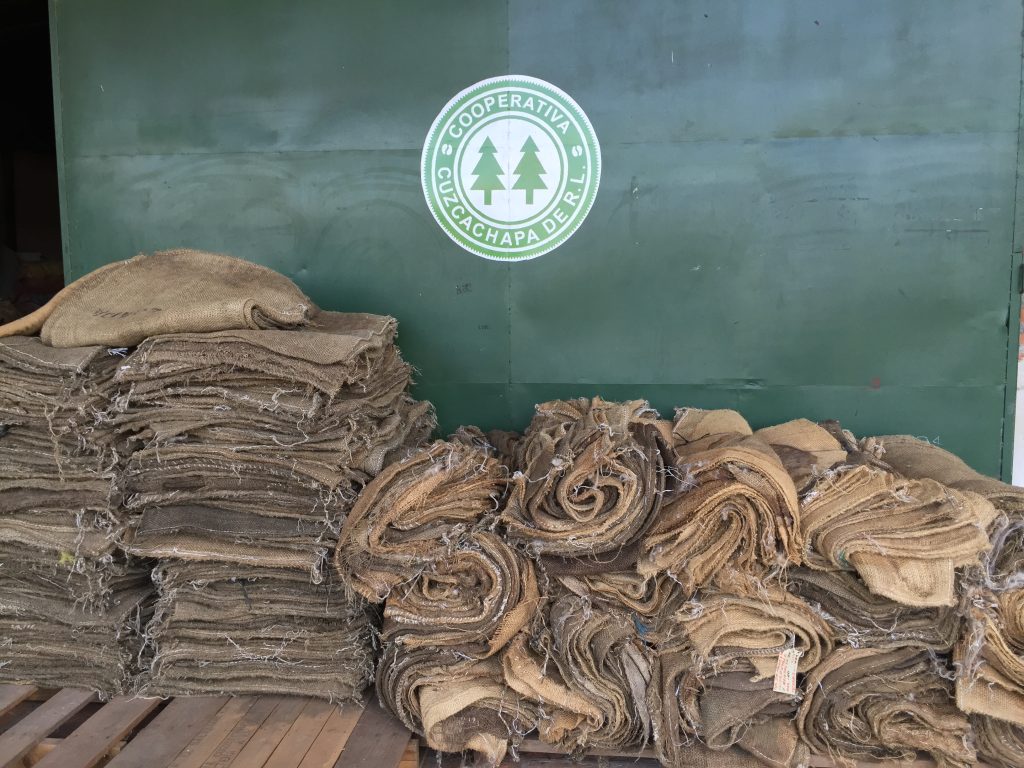 We visit Cuzcachapa two days during our trip in order to cup through 32 of the region’s coffees. Although we are surprised by a couple of unknown (to us) farms, we do select many of the farms we work with during the blind cupping. 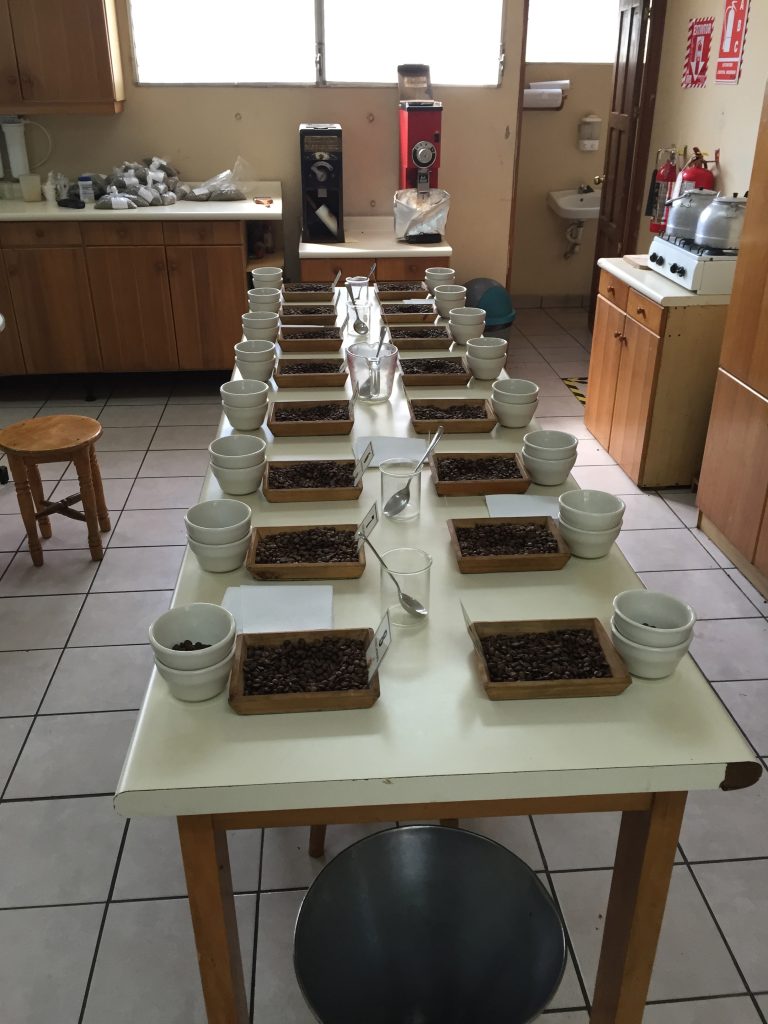 After Cuzcachapa we head to Fernando Lima’s mill, Los Balcanes. This is located in Finca Serbia. As this is my first trip to origin, this turns out to be one of the most informative portions of the trip. This is because while at the mill we are able to see the day’s harvest come in and go in to processing. The efficiency of the process is indicative of Lima’s style as a farmer. 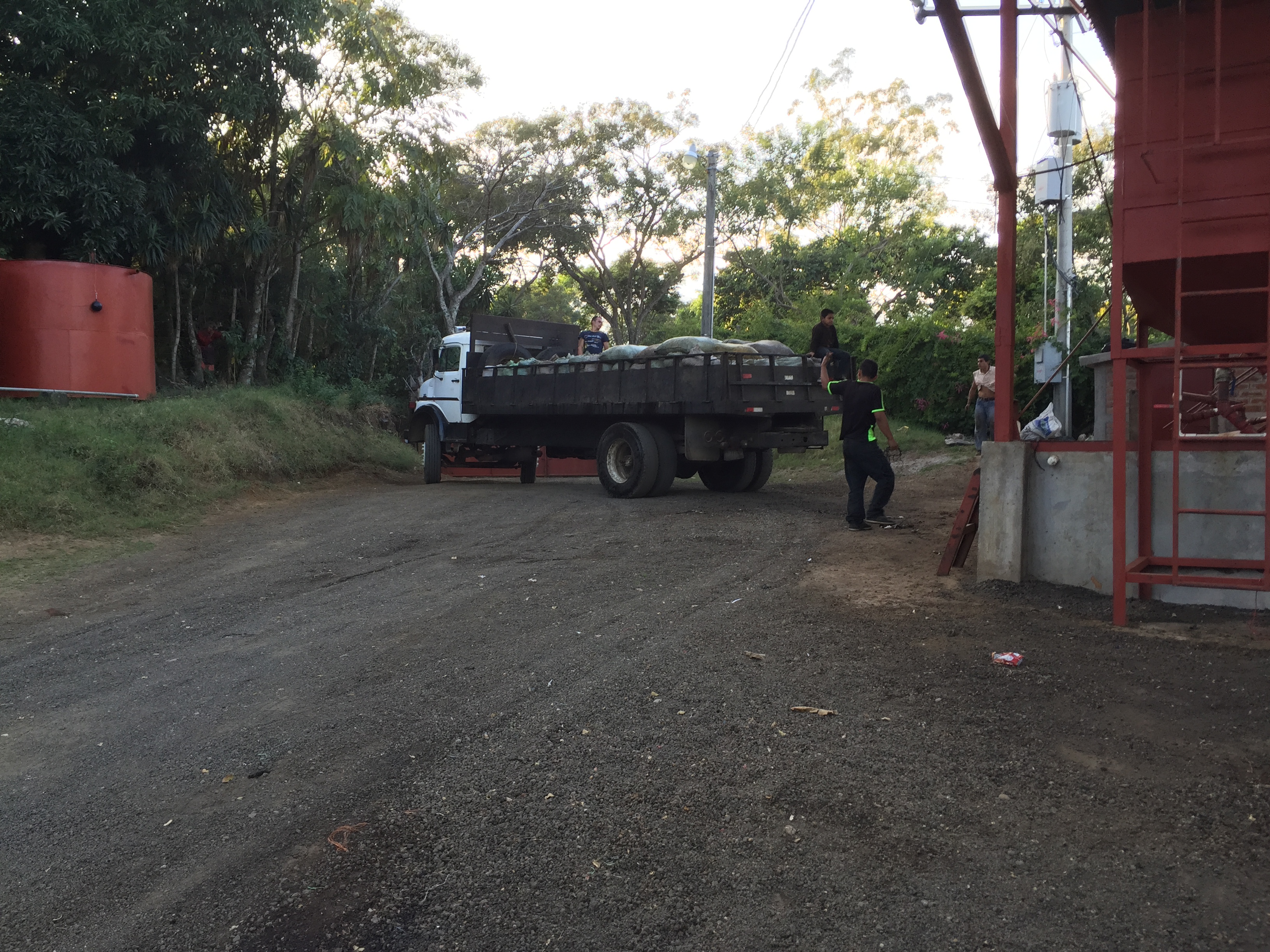 The coffee comes from the farm and goes straight in to the mill.

The truck comes in, backs up to the tank and the bags are unloaded within a matter of minutes. The coffee is run through a custom built micro-mill which reduces water use by bringing the fruit up three stories and dropping it back down into a Panagos which de-pulps the coffee and sends it out to the patio for drying. The Cascara (coffee cherry) is carried along a shoot and dumped in to a waiting truck that will take it to be used as fertilizer. 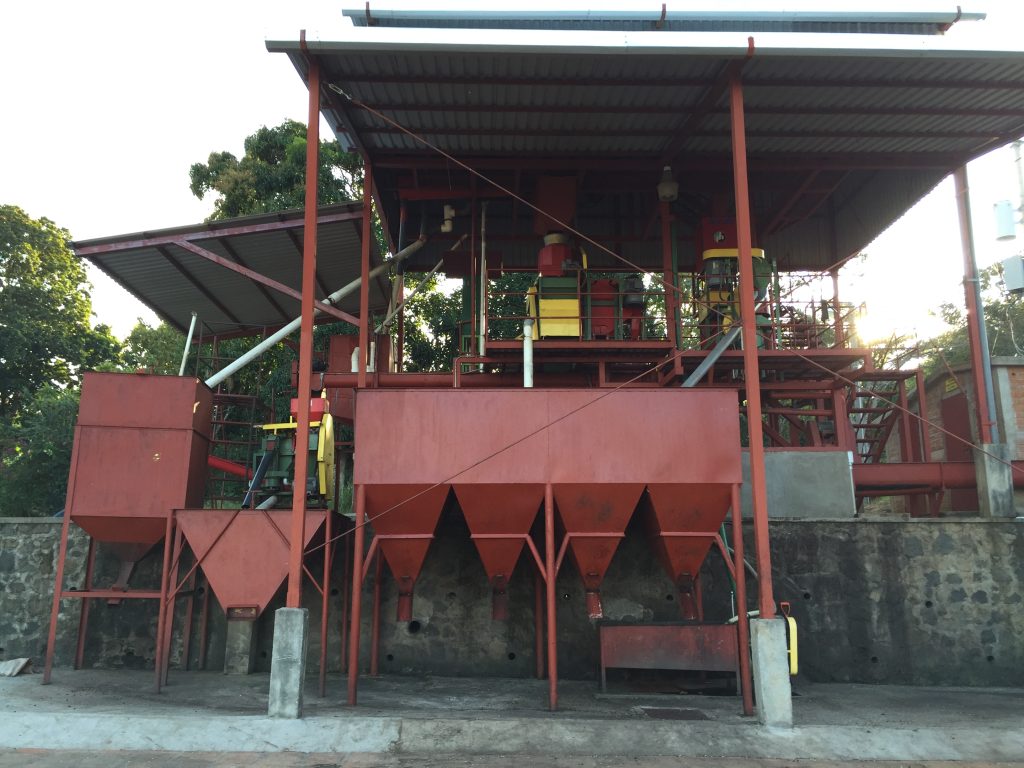 The mill at Los Balcanes.

The next morning Ernesto Lima takes us to visit Los Cañales. This is a formerly abandoned mill bought by a group of farmer’s in the region. The restoration has been underway since last year. Although it is already functioning with limited milling capabilities, there is a lot of work to be done here. Its enormous size is being compacted to create a more efficient environment, both for production and energy use. It is on track to vastly improving the capabilities of producers in the area. With much of the former machinery still in place, this gives us the opportunity to see the modernization that is taking place in the milling process. 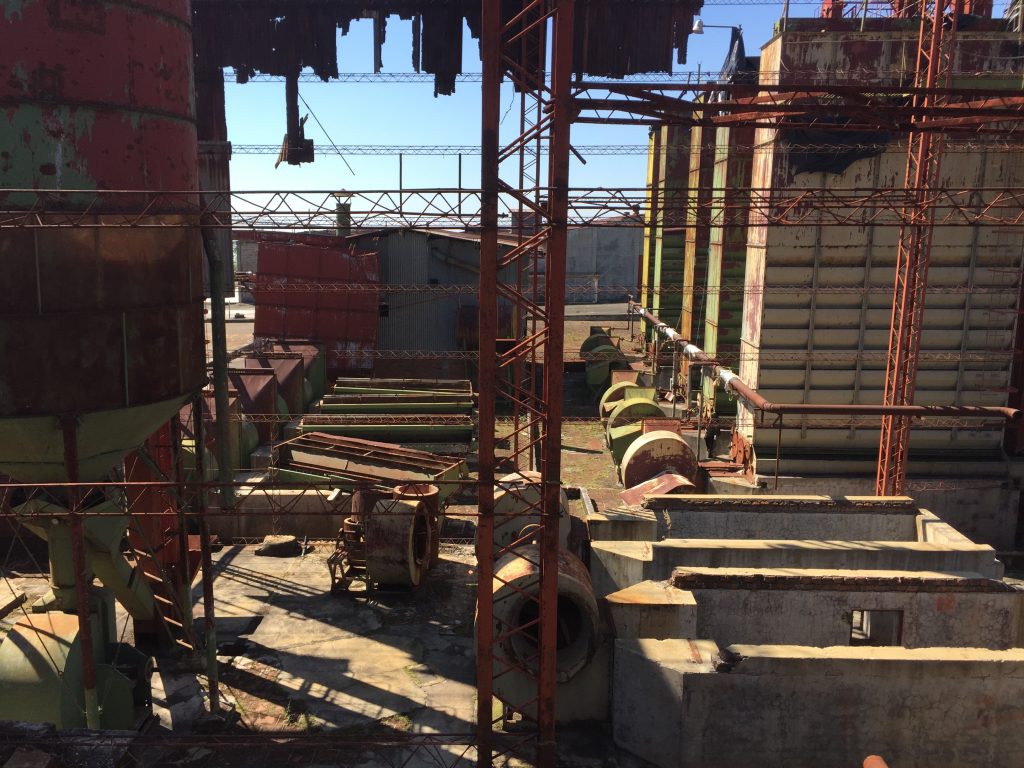 After Los Cañales, Ernesto takes us to his Finca Las Nubes.  Among the farms we source, Las Nubes was the most affected by the eruption of Ilamatepec. It has been rebuilding since. There has been a steady increase in planting of Dwarf-Borbón, with 40,000 new trees planted this past year. Additionally, 10,000 new Geisha trees have been planted. Other cultivars found are Red Borbón, Yellow Borbón, Pacamara, Castillo and San Pacho. 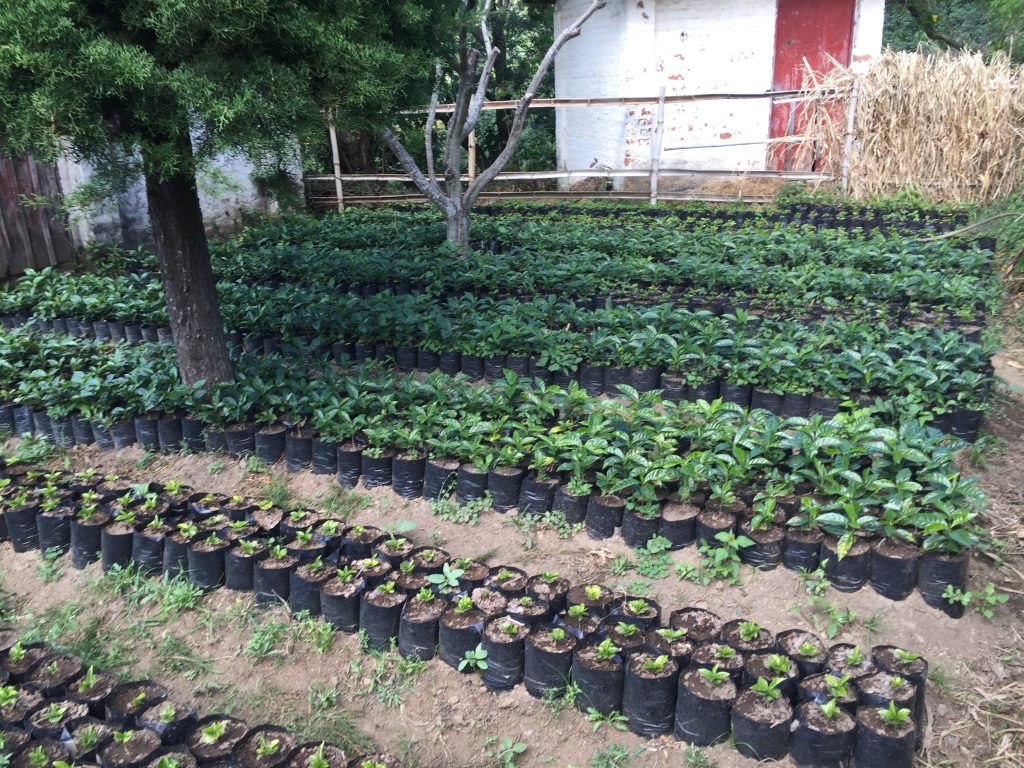 The final farm we visit during our trip is Fernando Lima’s Finca Santa Elena. Sitting above Lake Coatepeque, the views from the farm are incredible. The farm itself is just as beautiful, with dense forest providing shade for the coffee trees. 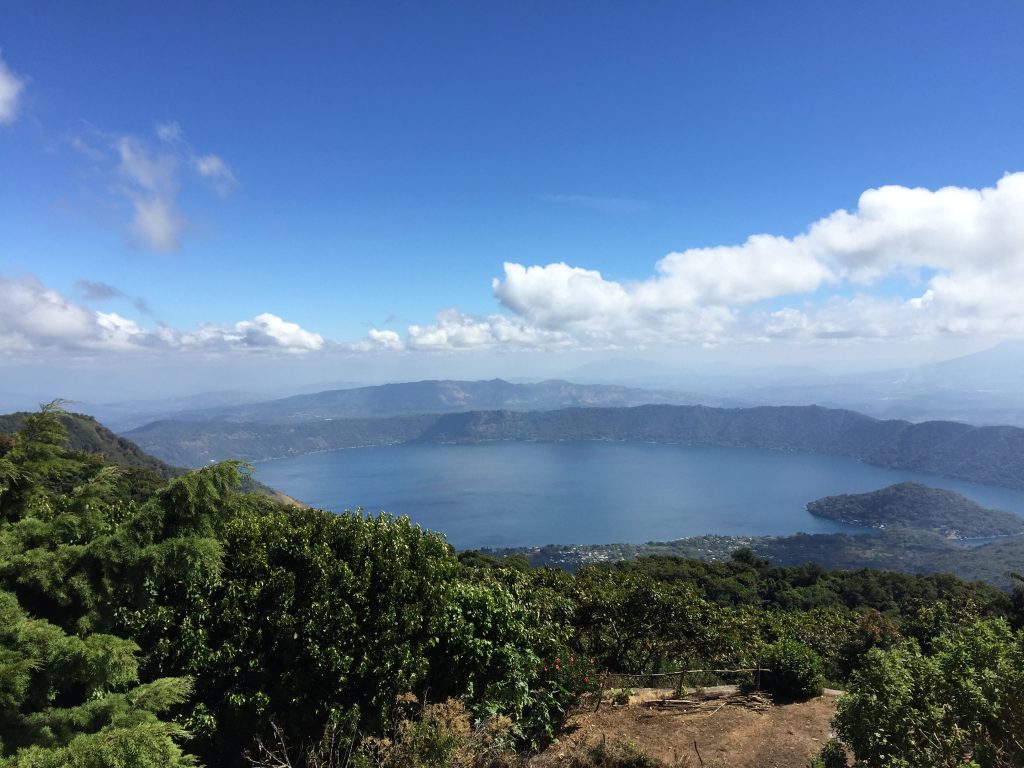 Possibly one of the best preserved farms in El Salvador, due in part to its proximity to the national forest preserve Parque Nacional Los Volcanes, Santa Elena continues to be home to some coffee trees that are nearly one hundred years old. They do not bear very high yields, but rather serve as a point of pride for a farm that persevered through a turbulent history. Cultivars on Santa Elena include Borbón, Catuai, Kenya and Pacamara (which is being harvest separately). This practice of separately harvesting cultivars is something we hope to see more of moving forward. 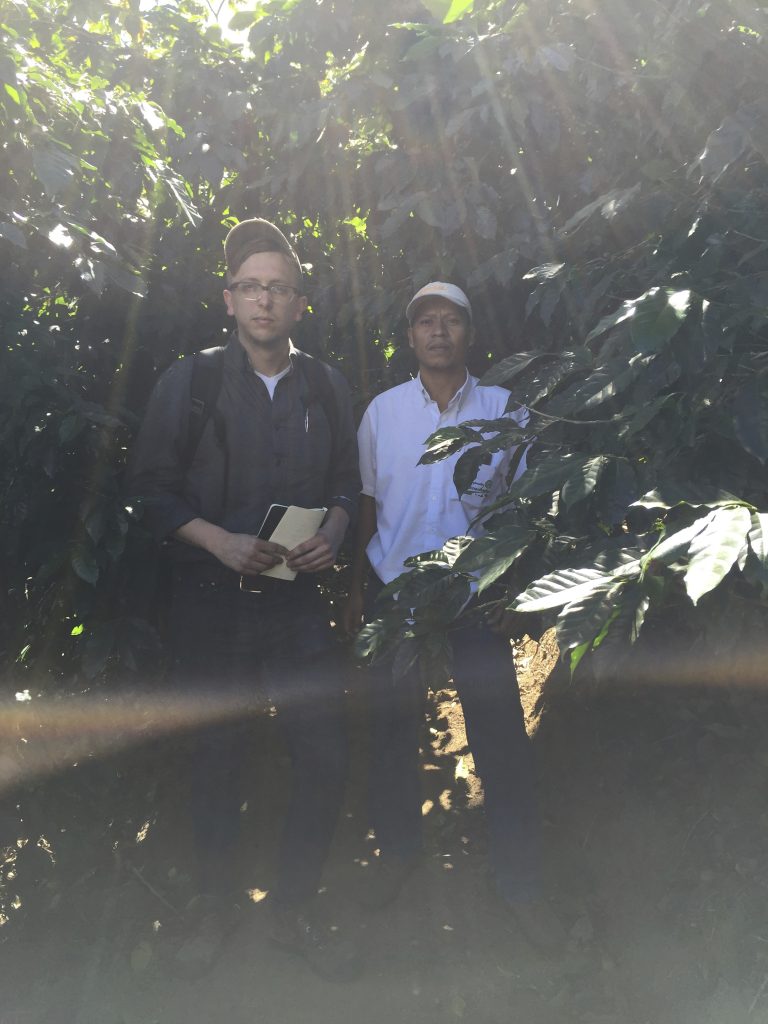 Traveling through the country and speaking with the people involved in coffee production afforded a very informative view of the process and an extremely rewarding experience overall. And although five days at origin is not enough time to fully understand the particularities of a country and its coffee production processes, Bridgeport Coffee’s nearly annual trips to El Salvador offer us a insightful window into a world that we are not directly involved in, but are very connected to. With every trip we take, we hope to understand a little more about coffee, El Salvador and its people.