This is the third of three posts on the Bridgeport Coffee trip to Costa Rica in March 2017 by Mike Pilkington, president and founder of Bridgeport Coffee.
See Part 1 (Overview) or Part 2 (The Science).

Terrazú in Costa Rica is one of the world’s great coffee regions, and the primary reason for Bridgeport Coffee making this trip. We had purchased a very small amount of coffee from a farmer from this region in 2016, and generally considered it to be the best coffee of the year. I have been anxious to get here and find out more about this region — more specifically about this family and the work they are doing in this relatively remote part of the world.

Terrazú is a Canton (county) in the Province (state) of San Jose. Located about 30-35 miles south of the capital San Jose, it is a pristine valley surrounded by the Talamanca Sierra Mountains with peaks that extend to 3000m above sea level. The drive from San Jose is comfortable with small but well maintained roads. There is a steady climb upwards and soon the view is of intermittent deep valleys filled with coffee trees and the surrounding tropical dry forest.

As we travel into higher elevations, glimpses of ash from the volcano Turrialba become visible.  Signs of the modern world include large wind turbines generating clean electricity. More coffee farms. The valleys deepen with coffee trees planted on every mountainside, some so steep I wonder how they farm them.

I have lost track of how many times it has occurred to me how much work it must be to be a coffee farmer. The people here have been some of the world’s best coffee farmers for generations. My deep respect for these people tells me it’s time they are paid more and I make a commitment to myself to buy more of this coffee in 2017 .

We arrive at the micro-mill, El Pilon, somewhere in San Isidro de Leon Cortez near the town of San Pablo about 1600-1700m above sea level and the family farms of Don Cesar and Don Edgar Ureña.

The story of how Don Cesar Ureña came to know Piero, the green coffee buyer for our importer, Cafe Imports, as they tell it sounds made up, but they swear it’s true, goes like this…

Piero, our green buyer, was doing some field work in Tarrazú when the Land Cruiser he was renting blew a tire in the micro region of San Isidro de Leon Cortes. Piero was at a loss of how to get himself out of the situation without a spare tire, when a man with incredibly kind eyes and an impressive mustache pulled alongside him and said, “¿Necesita ayuda?” (“Do you need some help?”)

That man was Don Cesar Ureña, the owner and operator of Don Pepe micro mill. Don Cesar took Piero back to his home and helped him fix his tire. By chance, Piero looked outside and saw raised beds with incredibly impressive looking cherry selection on them, and he knew that this car malfunction was no accident.

Holding in his excitement and disbelief that this was happening, Piero told Don Cesar that he was a coffee buyer, and the rest was history. Café Imports now imports nearly all of Don Cesar’s coffee, from the several farms that deliver cherry to Don Pepe micro mill. Don Cesar is a genius with Naturals and Honeys, and his ability to train his partner farms in cherry selection is honestly some of the best we have ever seen. They called their receiving tanks with only deep red cherry sangre de toro, or “bull’s blood.”

Don Cesar has been producing coffee his entire life. “The natural environment we have here…no one can take that away,” he says.

The best part of this story was left untold by Piero and Cafe Imports. Before this chance encounter, these amazing coffees from the farms of Don Cesar and Don Edgar were being sold to the local Beneficio at a fraction of their value. Since this relationship has begun, not only are the brothers receiving a fair price for their coffees, but they have been able to share the value of this relationship with their neighbors who are also producing some of the world’s best coffees. 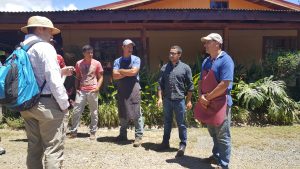 Don Edgar Ureña and Don Cesar Ureña there to greet us.

On the jute coffee bags that contain green coffee from Don Cesar’s mill, is a painted cartoon style interpretation of Don Cesar and his truck… had to get this picture 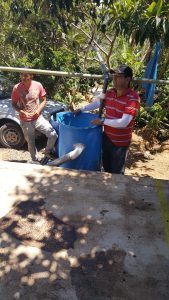 The Wet Mill at El Pilon

As discussed earlier, every mill in Costa Rica must be certified by ICAFE. Mill discharge water must be tested 3 times a year. This mill is so ingenious and simple the ICAFE discontinued certifying this style after 4, the real reason seems uncertain. Simplicity hard to govern? The Penagos Micro-mill, depending on size and capability, has a entry level cost of $70,000. Don Cesar said this simple invention cost only $400. It is used to process Natural coffees only. How it works in a few sentences…. Truck backs up to ramp, ripe cherries are deposited into bucket, fill with water allowing unripe or unhealthy cherries to float to the top, skim them off, open bottom gate to allow ripe cherries to flow into second bucket… oops, one run on sentence. 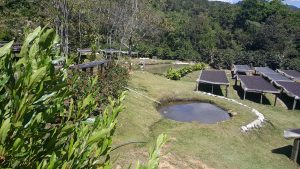 As we walk up the mountain, we come to a flat area, full of sun, perfect for drying coffee. There are 20 or so raised African beds with naturally processed coffee in varied stages of the drying process. The ponds are gravity fed by mountain fresh water springs. Pet fish and frogs in all stages of life live in the ponds. 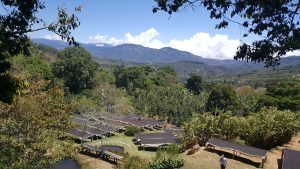 We are currently about 1700m above sea level. Cultivars on this section of the farm are primarily Yellow and Red Cataui. Cataui  is a mature (can be planted from seed) hybrid. A cross between Mundo Nuvo and Caturra developed by the Instituto Agronomico do Campinas in Brazil in the 1950s and ’60s. It is a common hybrid used in Central America. Average drying time is 16-20 days with a target moisture content of 8-9% 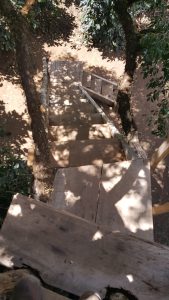 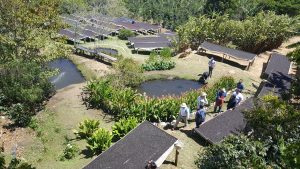 The stairs built into a big tree as a lookout. What a view. Oh my! I am not without the understanding that every place in the coffee world has its challenges, but at this moment I feel I am standing in a rural, wholesome paradise — a paradise filled with family and hard work and the pride of a job well done. Edgar talks of his days filled with love of work. Truly blessed. 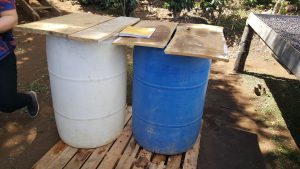 As simple as the mill was, so is the fermentation process. Before drying, the clean-whole cherries are put in these tanks for about 4 days for a simple fermentation. Not all coffee is treated this way. This is a relatively new process they have been experimenting with. Initial results have been promising as fermented coffees are receiving higher cupping scores than the same coffees dried without the fermentation. Typical fermentation temperatures vary, but currently the target is 45 °C (113 °F). Studies continue that include using different colored barrels to achieve different cup results as black, green, blue and white barrels absorb and distribute heat differently. 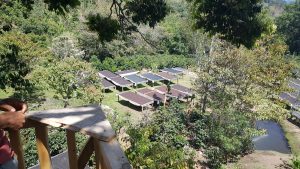 With this view from the lookout I want to thank everyone who made this trip possible:

Thank you to the crew at Cafe Imports for putting this trip together. Every one of you were fantastic. Meister, you are wonderful traveling companion. Thanks to Kimiyo for keeping us all together. And special thanks to Lucho for the insight only you could have provided. And, of course, thanks to my wife Cassi for being there and for marrying me in the first place.

Jump to Part 1: Overview or Part 2: The Science