Bridgeport Coffee in the Chicagoan 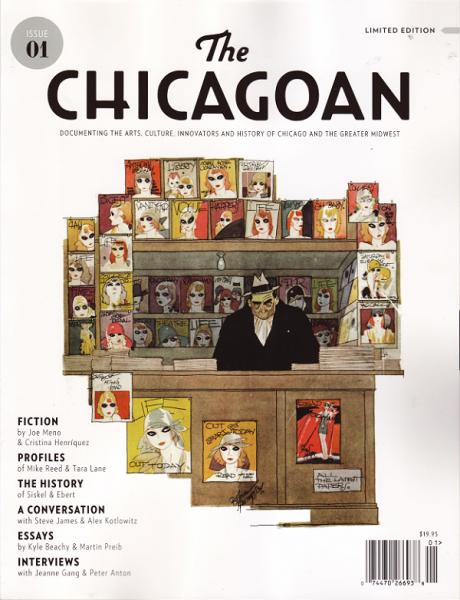 The Chicagoan is a dazzling new magazine that just came out with its (re)premiere issue. As described by Robert Feder in TimeOut Chicago, it’s “a sumptuous 194-page magazine that carries a dazzling array of articles, artwork and photographs, zero advertising and a cover price of $19.95. A line beneath the nameplate describes its mission as nothing less than ‘documenting the arts, culture, innovators and history of Chicago and the Greater Midwest.'”

This premiere is actually a re-premiere because there once was another magazine by the same name and partially similar slant that was published only from 1926 to 1935. Both the older incarnation and its new namesake resemble the New Yorker in their devotion to long-form writing, but the elder was more snooty and the new one is hipper and more populist — which makes sense, as its editor-in-chief and publisher is J.C. Gabel, the same guy who started Chicago’s Stop Smiling.

The new magazine is dazzling in a way that few magazines ever are, and surprisingly justifies its cover price of $19.95. That’s because there’s no advertising at all, brilliant long articles, gorgeous photography and artwork, original Chicago reporting, poetry, and even a great article about Chicago’s coffee scene in which your favorite coffee company is prominently featured:

There is fair trade, and then there is “relationship trade,” which is becoming increasingly common among any roaster, big or small, who can get “to origin” (where beans are grown) and connect with farmers. I’m told that for farmers, the pay for relationship-trade coffee hovers around 25 percent more than fair trade coffee.

“Just getting coffee to the green stage is a mind-boggling process,” says Mike Pilkington, owner of Bridgeport Coffee Co. Pilkington is a soft-spoken man in his forties who opened his coffee shop six [Note: actually eight] years ago and taught himself to roast a year later because he wasn’t impressed with the beans available to him. The roasters weren’t doing enough to help the farmers and educate the drinkers. Each bag of his beans comes with an info sheet telling its story. “Handpicked on slopes 1,200 meters high,” it might say, or “Wet-processed in an Indonesian co-op facility, where farmers band together to purchase washing and drying equipment.”

What’s especially cool about the timing is that Mike Pilkington, our founder and roastmaster, is off to El Salvador next week for more of our own roasts’ “relationship trade.” Anyone who has tasted our outstanding Las Nubes or Santa Josefita roasts has experienced the benefits of his El Salvadoran trip last February.

You can learn more about The Chicagoan here, where eventually they will also publish web-only material. (By the way, you can see those “info sheets” on our Roasts page.)