Bridgeport Coffee is proud to offer an extraordinary new coffee — Finca Santa Elena – Bourboncillo — with an important and amazing backstory, recounted by our president and founder:

For years Fernando and Ernesto Lima and I have discussed the value of single-variety offerings.

Historically, the strategy has been to diversify plantings to manage risk of disease and insects. This is a sound farming strategy that, as long as the weather is just right, produces very fine coffees. On a typical coffee farm in El Salvador you will find a wide range of coffee varieties — Yellow, Orange, and Red Bourbon, Pacamara, Pacas, Caturra, Cataui, a mix of Kenya hybrids (both old and new), and… well, you get the picture.

The discussion has circled around the idea of beginning the process of picking, processing and presenting to the consumer a single variety of coffee — an approach similar to the one taken by the wine industry years ago. Casual consumers of wine know that if they prefer Chardonnay or Sauvignon Blanc as a starting point, then they make selections based on price or region. Are coffee customers ready for the analogous types of single-variety options that wine customers know and love?

This idea is not new to the coffee industry. Bridgeport Coffee has been offering the Santa Josefita as 100% Bourbon for years, and there was a time several years ago that the coffee industry was discovering Pacamara as a single-variety offering.

What is beginning to change at the farm level is a commitment to plant single-variety plots at higher elevations. As coffee-growing regions grow warmer, farmers are able to plant at higher elevations where the colder temperatures offer some level of protection from the most devastating outbreaks of fungus and insects related to climate change.

Years ago, Fernando said about the highest elevation coffee could be planted in El Salvador was 1,850 meters (about 6,060 feet, or 1.15 miles above sea level — almost 1,000 feet higher than Denver, Colorado). This section of Santa Elena that once was the old farm, El Corozo, has been expanded upward by 1,000 meters (to 1.33 miles above sea level).

At this elevation, Fernando has been planting some of the world’s best varieties in hopes they will respond to this new micro-climate. 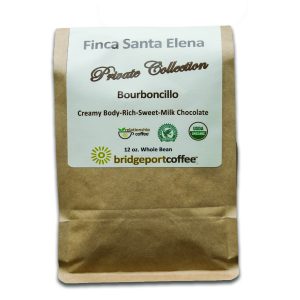 On this ancient finca there is not only the original Bourbon planted in the 1930s and 1940s, but also Dwarf Bourbon (Bourboncillo), the highly sought-after Kenya Hybrid SL-28 and Panama Geisha.

We at Bridgeport Coffee have been waiting patiently for the Bourboncillo to grow up (it takes 5 years) and it is finally here.

The coffee is, in a word, amazing. It is one of the best coffees from this region I have ever tasted. The Bourboncillo includes all the qualities of Bourbon we love — intensely sweet with easy acidity — but also features a deep creaminess and milk chocolate finish as it cools.

Quantity is limited, and the Bourboncillo will be offered for sale exclusively in our coffee shops — or you can purchase this extraordinary coffee online here.

El Corozo is located in the upper section of Ilamatepec Volcano (also known as Santa Ana Volcano). In the area of Cantón Palo de Campana, in Santa Ana department, Apaneca Ilamatepec, which is origin certified. The farm was established as a coffee plantation around 1930, and, to date, many of the original coffee trees that are 80 years old are still healthy and producing coffee, as well as many centenarian shade trees.

The farm name came from the many corozo shade trees, found in this area. El Corozo is surrounded by National Park ¨Los Volcanes¨ which is home to a vast variety of flora and fauna. Wild animals from these forests find shelter in the sloping lands that make up this farm. Deers, tepescuintles, cuzucos, comadrejas, raccoons, porcupines, are between some of the many other wild animals that frequently visit or reside in ¨El Corozo¨ lands, providing them shelter under the coffee plantation and shade trees — ingas, cypress, corozo trees, and a large diversity of about 70 different species.

As its neighbor farm Santa Elena, ¨El Corozo¨ has been known for its very fertile lands since long ago. In the year 2006, the Ilamatepec volcano, had an eruption that covered the whole farm with a volcanic ash layer of about 50 cms high. The year of the eruption, almost the whole crop was lost, and at the beginning it was thought that the coffee trees wouldn’t survive. Gladly almost all of the trees survived, and the soil became richer and more fertile the following years. In the upper areas of the farm closer to the crater, many trees were lost, and temperature increase 1 degree. Little by little the farm is growing (from about 40 hectares [about 100 acres], to almost 60 hectares [150 acres] in 2018 ) with new coffee plants in areas that before the eruption were too cold for coffee.

Experts came from Ecuador after the eruption, and recommended that farmers change their methods to fully organic, because volcanic ashes gave the soil the necessary acidity. Another one of their reasons was that mixing ashes with chemical fertilizers would poison the land because of their similar pH levels, draining the nutrients from the soil and making the land infertile. Since 2006,¨El Corozo¨ has been worked as a fully organic farm, which also holds the Rainforest Alliance certification.

The coffee production is managed in the traditional process, washed with clean water, and dried in clay patios. In recent years however new coffee processes, such as natural, honey, and dried in African beds, even under shade African beds have been taking an important preference in customers’ demands.